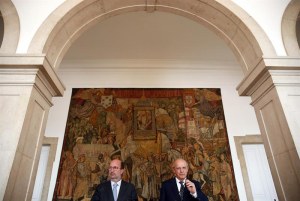 In Lisbon this week, following much consideration by The European Commission, Spain and Portugal finally agreed to relaunch discussion on the future of a nuclear waste storage site, which rests on the banks of a major Spanish river to the west of Lisbon.

Originally Spain had plans to buld a waste storage facility at the Almazar nuclear power plant. The plant uses the Tagus River to cool its reactors, but Portugal objected to this move and appealed to the European Union.

“Following the initiative of  the President of the E, Juncker, we have reached an amicable agreement on the Almaraz case,” a commission statement said.

Augusto Santos Sila the Portuguese Foreign Minister stated at a press conference that the new agreement had been reached thanks to EU meditation and would pave the way for further dialogue.

Lisbon is now to withdraw its complaint and Spain are to postpone their plans to construct the waste storage facility, until the Portuguese officials have conducted their own investigations and inspection of the plans.
Santos Silva released a statement, “Spain undertakes not to issue any authorization to operate the storage facility, but, above all, it undertakes not to take any measures that may be considered irreversible.”

Portugal complain initially that Spain had rushed its proposal through, in a procedure that went against industry standards, by not properly consulting Portugal, an implicated by its geography.

Madrid quickly dismissed the complaint at first and remained adamant that they would press ahead with the plans.

The Almarez Nuclear Power Plant sits on a section of the Tagus river which flows through the western region of Extremadura and sits around 70miles upstream of the Portuguese border.