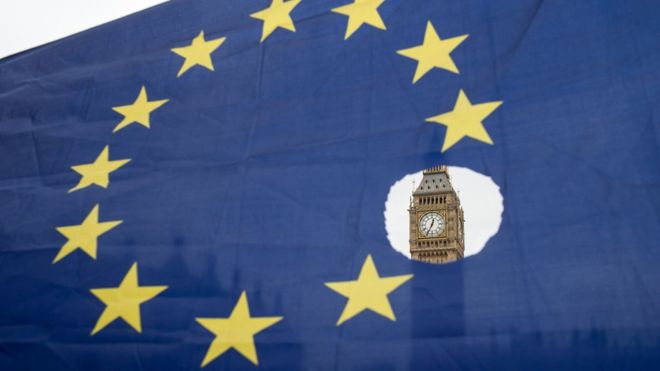 Reality Check: Britain and EU at odds over citizens’ rights

When British Prime Minister Theresa May first trailed the Conservative Party’s proposals for EU citizens living in the UK at last week’s EU summit, the initial response from her fellow leaders was hardly enthusiastic.

Now they’ve seen the details, they haven’t changed their tune.

There is actually a fair amount of common ground between the two sides, but the details – naturally – matter.

The EU’s goal on citizens’ rights, said its chief Brexit negotiator Michel Barnier, is “the same level of protection as [is offered] in EU law”.

This is a crucial point for the European negotiating team.

However pleased it may be that the UK has finally produced a detailed policy document on one aspect of Brexit, this proposal falls short of what it wants in several respects.

The EU’s Essential Principles on Citizens’ Rights argued that the rights of EU citizens in the UK, and British citizens elsewhere in the EU, should not change as a result of Brexit.

All their rights should be respected.

The British proposal, on the other hand, entails the loss of some of those rights – the legal protection of the European Court of Justice (ECJ), for example, or the unconditional right to bring family members into the UK from third countries.

The cut-off date for eligibility for settled status also needs to be clarified. The UK proposal suggests that the cut-off could be as early as 29 March 2017, the day when Article 50 was triggered.

But it is unlikely that the EU would be willing to agree to any date that has already passed. It would mean – in effect – that some citizens would lose some of their rights while the UK was still a member of the EU.

Opposition to such an idea would be seen in many EU capitals not just as a point of principle, but as a matter of EU law.

It is more likely that British negotiators will eventually agree to settle on their other suggested date – the date on which the UK actually leaves the EU, which is currently due to be 29 March 2019.

If the UK shows flexibility on the cut-off date, it will expect equal flexibility on other matters from the EU. But trust between the negotiating teams appears to be in rather short supply.

It will need to be established quickly because a similar mood of compromise will be needed to reach agreement on the legal system that will underpin any agreement.

The obvious answer to this conundrum is to create a joint UK-EU arbitration panel that will ensure that the terms of an agreement are respected under international law. But this will require both sides to alter fairly entrenched positions.

So, are there grounds for optimism?

Well, the UK proposal does contain a few carrots.

It accepts that child benefit payments will still be paid for the children of EU workers in the UK whose families live abroad. This was a right that David Cameron tried but failed to abolish.

It advocates a “grace period” of two years to allow EU citizens to get their status in order. It is an idea that could dovetail conveniently with the need for transitional arrangements, to ensure that the British exit from the EU takes place without sudden shocks.

As for British citizens who have retired abroad, the UK proposal offers the reassurance that the government will continue to export and “uprate” the UK state pension within the EU.

So if, for example, you live in Spain, you will still get annual pension increases – something that is not always guaranteed if you live elsewhere in the world.

There is also a promise to simplify bureaucratic procedures for people applying for settled status in the future. But many of them will be furious that they have just spent time and money to obtain permanent residence in the UK, only to find out that they need to start again from scratch.

“How can you promise to give people certainty and then tell tens of thousands that their permanent residence is going to be invalidated?” says Ian Robinson, a partner at the immigration law firm Fragomen.

“It would have been just as easy to continue to recognise permanent residence already granted but just stop accepting new applications,” Mr Robinson adds.

The UK may argue that its proposal at least tries to offer something to everyone. But so far it doesn’t do enough to satisfy the EU.

So even if the basis for a deal can be envisaged on this one aspect of Brexit, there is plenty of bridge-building still to be done.

When the UK proposal was first trailed, it was described as a generous offer. That was quickly amended to a “fair and serious” one.

Because the EU doesn’t see this as a generous offer, and it has been prepared to say so. It involves millions of EU citizens losing some of the rights they currently enjoy, and for EU leaders that is no cause for celebration.