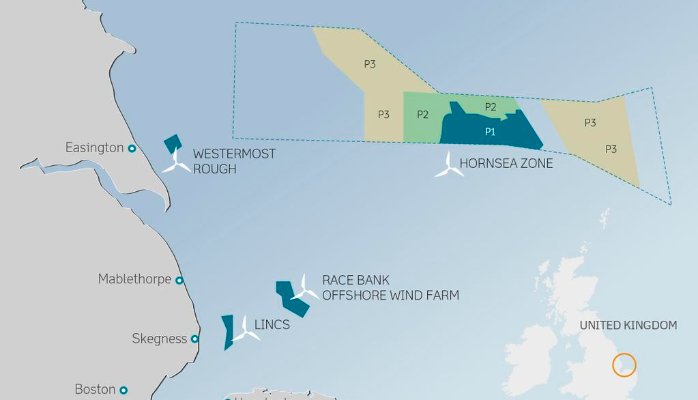 Plans for the world’s biggest offshore windfarm off the Yorkshire coast are to be expanded to an area five times the size of Hull after being approved by ministers.

The multibillion-pound Hornsea Project Two would see 300 turbines – each taller than the Gherkin – span more than 480 sq km in the North Sea.

Fifty-five miles off the coast of Grimsby, the project by Denmark’s Dong Energy is expected to deliver 1,800MW of low-CO electricity to 1.8m UK homes.

The development would represent a large boost to the UK’s wind energy industry, with Dong Energy pledging to invest £6bn in the UK and create more than 2,500 jobs. However, the company has yet to make a final investment decision on Hornsea Project Two and a spokesman said it could be two years before it is signed off.

Greg Clark, the business and energy secretary, said: “The UK’s offshore wind industry has grown at an extraordinary rate over the last few years, and is a fundamental part of our plans to build a clean, affordable, secure energy system. Britain is a global leader in offshore wind, and we are determined to be one of the leading destinations for investment in renewable energy, which means jobs and economic growth right across the country.”

Ministers said the windfarm would create 1,960 construction jobs and 580 operational and maintenance jobs.

The government approval comes amid uncertainty over the future of the Hinkley Point C nuclear project after Theresa May delayed signing off the new £18bn power plant last month. The crown estate – still legally owned by the Queen – said this weekend that offshore windfarms will be on course to meet 10% of the UK’s electricity by 2020. Hinkley Point C, the organisation pointed out, was not expected to be constructed until the mid-2020s and even then would produce only 7% of the country’s power.

Huub den Rooijen, director of energy, minerals and infrastructure at the crown estate, said: “Offshore wind is already on course to meet 10% of the UK’s electricity demand by 2020. Major developments of Hornsea Project Two’s scale will pave the way for its continued growth alongside driving down costs, creating high-value jobs, and supporting the UK’s transition to a low-carbon energy supply.”

The Hornsea decision was due to be announced two months ago but was delayed amid fears the noise of building the massive windfarm would disturb porpoises. The Department for Environment, Food and Rural Affairs proposed designating a vast, 36,000 sq km (14,000 sq mile) tranche of the North Sea – including the entire 300 sq km area of the proposed wind farm – as a special area of conservation for the harbour porpoise. A habitats regulations assessment was carried out to look at “the likely significant effects of the project, both alone and in combination with other plans and projects” on the porpoise protection zone.