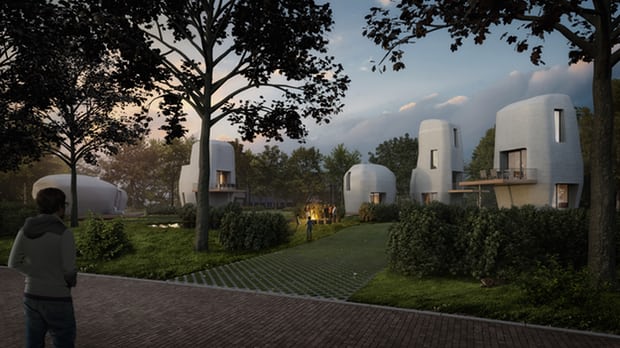 The Dutch city of Eindhoven is to be the first in the world to have habitable homes made by a 3D printer, in an innovation its backers believe will revolutionize the construction industry.

Of the first five new houses to be put on the rental market next year, the smallest, with two bedrooms, has already attracted applications from 20 interested families just a week after images were made available.

Known as Project Milestone, the development is said by the Dutch construction company Van Wijnen to offer a solution to a shortage of skilled bricklayers in the Netherlands.

The method will also cut costs and environmental damage by reducing the amount of cement that is used, said Rudy van Gurp, a manager at the firm, which is working in collaboration on the project with the Eindhoven University of Technology.

The 3D printer being used is essentially a huge robotic arm with a nozzle that squirts out a specially formulated cement, said to have the texture of whipped cream.

The cement is “printed” according to an architect’s design, adding layer upon layer to create a wall, and increase its strength. “We have no need for the moulds used to create houses made with cement today, and so we will never use more cement than is necessary,” Van Gurp said.

Only the exterior and inner walls of the first of the new homes will be made using the printer, which will be located off-site.

By the time the fifth of the homes is built – comprising three floors and three bedrooms – it is hoped that the drainage pipes and other necessary installations will also be made using the printer, which will be located on the site of the new houses, which will again reduce costs.

The use of 3D printing additionally opens the possibility of placing wireless sensors directly into the properties’ walls to allow a home to be fully “smart”, incorporating all the lighting, heating and security controls required.

Designers have described the style of the first set of homes being built by Van Wijnen as “erratic blocks in the green landscape”.

They are said to illustrate the fact that 3D printing allows the construction of buildings of “almost any shape… whereas traditional concrete is very rigid in shape”.

Van Gurp said, however, that the beauty of 3D printing was that people will in time be able to construct homes to suit their own tastes.

“We like the look of the houses at the moment as this is an innovation and it is a very futuristic design,” said Van Gurp. “But we are already looking to a take a step further and people will be able to design their own homes and then print them out. People will be able to make their homes suit them, personalise them, and make them more aesthetically pleasing.”

Van Gurp said he believed that the use of 3D printers in the construction of homes would be “mainstream” within five years.

He said: “I think by then about 5% of homes will be made using a 3D printer. In the Netherlands we have a shortage of bricklayers and people who work outside and so it offers a solution to that.

“It will eventually be cheaper than the traditional methods. Bricklaying is becoming more and more expensive. Alongside, bricks and the use of timber, this will be a third way, which will look like stucco [plastered] houses, which people like.”

The five homes – being constructed consecutively in a wood in the district of Meerhoven close to Eindhoven’s airport – will be completed by the middle of 2019. They will be rented out by the real estate company Vesteda. “We have to get the permits and the houses will be built in line with all Dutch housing regulations,” said Van Gurp. “We can make all the calculations but we actually have to do tests which involves making the walls in real life.”

Asked whether he would live in one of the homes, Van Gurp said: “For the first house we already have 20 candidates, and that is after only a week of having the images on our website. I have three children, and so the first one would be too small for us. But I would live in the biggest house, yes.”

All the houses will have foundations built using the conventional methods. “We only use 3D printing where there is value to it,” Van Gurp said.

Eindhoven University of Technology has been a pioneer in 3D printing using concrete. Last year the south-eastern town of Gemert opened the world’s first 3D-printed cycle bridge, which had been made at the university.