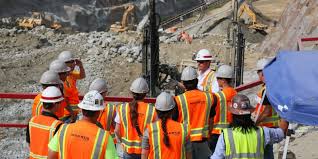 Ireland will need an extra 90,000 foreign workers to move here over the next two years to prevent a labour shortage which could lead to spiralling wages and inflation.

The shocking news that we are running short of workers has come to light as a new report forecasts our economy will grow by 4.7% this year and 3.9% next year.(Pic: Shutterstock)

These figures are based on booming tax receipts and overall consumer and business sentiment, according to the Economic and Social Research Institute.

The influential think tank predicts that the unemployment rate will drop to just 5% next year, down from its current 5.8%. ESRI research professor, Kieran McQuinn, said the institute is predicting that Ireland will need to find 90,000 extra workers over the next two years.

‘That’s basically what we would need to keep the labour force at the level required to keep unemployment at that rate,’ he told Extra.ie.

‘So we have attracted large numbers into the economy before.

‘That was in circumstances where other – particularly eastern European – economies, hadn’t grown as strongly.’ Professor McQuinn also pointed out that ten years ago Ireland did not have its current accommodation problems and high rents.

‘We’re getting to the point where we need to attract people from abroad, otherwise we’re going to have wage inflation and it’s not quite clear where those people will come from,’ he said.

The jobs that are needed are a mixture of high-skilled and well-paid positions, as well as lower-skilled jobs – without which the country would suffer a skills shortage.

‘Where the jobs are coming in the economy… it’s very broadly-based and across different sectors,’ he said.

‘There’s also a lot of construction activity over the coming period, and that’s going to require people of different skill sets,’ he added.

The forecast comes just as internet giant Amazon announced yesterday that 1,000 new jobs are to be created in Dublin.

The ESRI – which released its summer Economic Commentary last night – also warns against a tax cuts giveaway which it said would be like ‘pouring petrol on the fire’ in an already strong economy.

Prof. McQuinn said: ‘With the [national] development plan there’s a lot of money going to be spent over the coming years.

‘It’s an economy that’s already growing very strongly, so putting more money into the economy through taxation policy would run the risk of it over-heating. Pouring petrol on the fire is the analogy that is often used.’ He said one possible way of boosting the workforce would be to attract back Irish people who left in 2007/8 after the crash.

‘It would be one source, but I think there’s only a limited supply of those kinds of people looking to come back. But returning emigrants would be one source of that supply – certainly it would help.’ Prof. McQuinn sees Ireland attracting foreign workers from across the EU.

He said the economy had to be sustained and invested in so that ‘we don’t get back into that awful boom-bust cycle that’s, unfortunately, characterised Irish economic activity over the past 25-30 years’.

According to recruitment specialists Hays Ireland, more than three-quarters of Irish companies experienced a ‘moderate’ or ‘extreme’ skills shortage last year – the majority in IT, life sciences and construction. Some of these shortages are being met through migration and investment in training and education, the ESRI says.

‘While Ireland does not exhibit human capital deficits, skill shortages in fast-growing sectors are starting to emerge and challenges to the employment of low-skilled individuals persist,’ the ESRI report says.

‘Given the continued increase in investment, the question arises as to whether such investment is sustainable or poses an economic risk due to potential overheating.’ The ESRI is keeping a close eye on the economy, according Prof. McQuinn.

‘The economy is converging on what we’d call its potential level of activity.

‘We don’t, at the moment, think the economy is overheating but we are conscious of it.

‘We also keep a close eye on the rate of credit growth in the economy, and whilst the stocks of credit are still quite low by historical standards, you do see quite a pick-up in terms of the growth rate.

‘I think it’s something we have to monitor over the next 12 months.’