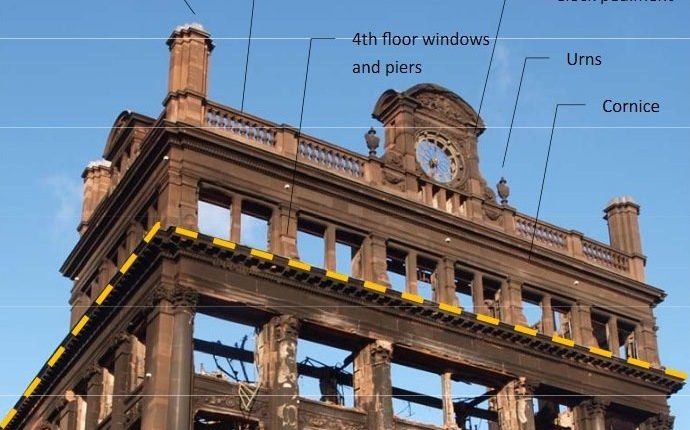 Retailer Primark says it plans to retain and refurbish the façade of its Belfast store that was gutted by fire a few weeks ago.

Primark has lodged an application to Belfast City Council for listed building consent for conservation works to Bank Buildings, “involving the taking down, recording and assessment for restoration purposes of the building above the fourth floor cornice line to the Bank Street, Castle Street and Castle Place elevations of the building for off-site storage”.

The application says: “The proposed works are required to facilitate further investigations on the structural integrity of Bank Buildings following the recent fire and to provide a longer term solution for the retention of what remains of the facade. For health and safety reasons this is not currently possible. The investigations will also inform decisions about the future of the building.”

An outline conservation statement and a design and access statement has been prepared by Hall Black Douglas Architects Ltd on behalf of Primark Stores Ltd.

The fire that took hold in the building on 28th August has left a significant proportion of the internal structure has either collapsed or severely damaged, with the external facades subject to severe damage. It is intended that conservation statement “will form the basis from which educated and justifiable remedial strategies for the building can be undertaken”.

Primark has retained Bennetts as its contractor for the rescue project with Keltbray as its demolition contractor. The project team is made up of project manager Brendan Boyd of Boyd Project Services, JCA Architects and S&C Engineers DBFL. The conservation team comprises Hall Black Douglas, conservation engineers Sinclair Johnston and Turley as planning consultant.

The planning application states: “At present, the building’s significance as a heritage asset is under threat, notably from the detrimental effects of weather and the inability to undertake major restoration works within the cordon due to potential structural instability. Accordingly, a series of methodologies have been proposed to enable this initial phase of work to be implemented subject to statutory approval.”

It also sets out the historical and architectural significance of the Victorian building.

Following the fire, all elements of original timber structure (roofs and floors) have been completely destroyed. Steel flitch beams and original cast iron columns have either collapsed, are severely twisted and buckled, or have lost their integrity at their bearings onto the perimeter walls. This has resulted in loss of restraint/support to the outer wall to enable it to resist horizontal wind loads. In the front portion of the building a small section of timber floor has remained intact at second floor level. A substantial amount of collapsed debris, including steel beams and columns, are balanced on this floor and against the perimeter walls.

What remains of the internal structure is the more modern steel and concrete elements completed in the late 1970s, and as part of the recent refurbishment works by Primark.

However, the external structure is still standing, despite not much left by way of support.

The outline conservation statement says: “The existing elevational perimeter has remained in-situ, demonstrating resilience through recent high winds and storm conditions, and a potential opportunity exists to carefully stabilise the existing facades. Following stabilisation, further opportunity exists to restore and re-construct the building with a minimal loss of historic fabric as is practically possible to retain historic authenticity.

“Surviving high-quality architectural record drawings support our understanding of the physical fabric, and an archive of historic information, including photographs, provides a sound base on which to make a range of conservation decisions, including detailed replications of damaged stone elements and the re-construction of the roof structure.

“A range of sophisticated technology is available to the conservation team, such as the use of non-contact 3D digitisers, to record historic fabric in-situ and produce accurate replications of complex historical features in a safe manner.”

The plan is to dismantle the remaining top section of façade by hand, dismantling each piece top down using man access and manual handling for light stones and man rider and crane for heavier stones. The method, as set out by Wentworth House Partnership, will be to loosen the stone from its neighbours and then to separate. Not all stones may be recoverable intact due to weathering and fire damage, the consultants warn. Each stone will be marked with its reference and orientation before being removed. 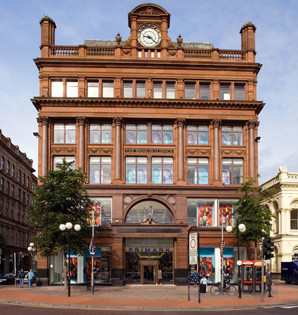