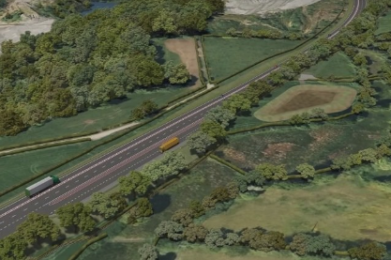 The £135m project involves the construction of a 9.8km bypass connecting Caernarfon and Bontnewydd.

It will create a western bypass to Llanwnda, Dinas and Bontnewydd, and cross the existing A487 south of Caernarfon.

Detailed designs, preparations and ground investigations are still taking place with the setting up of site compound and offices to begin shortly. Construction will then begin during this winter, said the Welsh government, which has awarded the contract.

“I have made clear this scheme will deliver for the area and provide a boost for the region’s economy. Balfour Beatty Jones Bros will be putting this into action by offering local employment opportunities as well as placements for trainees, apprentices and graduates. There will also be a prime focus on local spend on materials and subcontracts where possible and meet the buyer events will be held in due course to encourage local people and companies to apply for work on the project.

“The Welsh government is investing substantially in the Caernarfon and Bontnewydd bypass which will make a real difference to communities in the area as well as the travelling public.

“Design and development work continues at speed and construction will begin shortly.”

Balfour Beatty regional managing director Thomas Edgcumbe said: “Today marks a significant milestone in the delivery of a scheme which on completion will provide significant benefits to the economic landscape.

“Having worked with Jones Bros and the Welsh government on a number of ongoing and historic projects, we are confident that we will successfully deliver this highly anticipated scheme to schedule and leave behind a lasting legacy for the local community.”

Hefin Lloyd-Davies, contracts director at Jones Bros Civil Engineering UK, added: “The progression of the contract is pleasing and we’re looking forward to providing benefits to the region including jobs, training, and skills. We have a proud history of not only delivering high profile projects in a joint venture with Balfour Beatty, but caring about the communities in which we operate.”