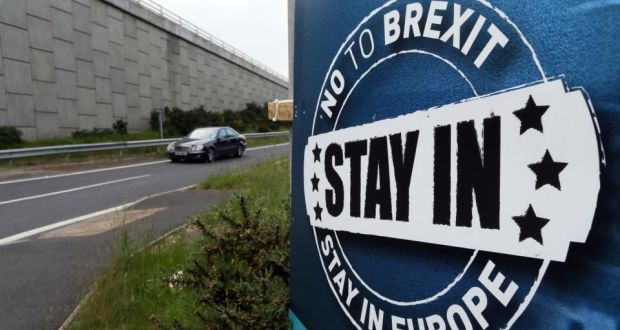 No to Brexit: a remain sign in Northern Ireland. A hard Brexit is expected to result in higher prices in the Republic, as UK multinationals pass on the cost of a weaker pound to consumers.
The Government will have €600 million less for spending and for tax cuts in the event of a hard Brexit, the Economic and Social Research Institute has warned.

In its latest economic outlook the think tank calculated the impact of the United Kingdom’s departure from the European Union on the growth potential of the Irish economy, which in turn governs the level of government spending allowed under EU rules.

It found that a hard Brexit would reduce the fiscal space available to the Government by at least €200 million a year for the first three years after the UK leaves the bloc, in 2019.

The ESRI’s intervention comes as Taoiseach Leo Varadkar travels to his first European summit in Brussels today. Although Brexit is not on the official agenda for the two-day meeting of the European Council – the EU’s highest decision-making body, made up of the heads of EU governments – the issue is likely to dominate the informal exchanges between leaders.

The Taoiseach is expected to have a number of meetings with his EU counterparts, including one scheduled with the German chancellor, Angela Merkel, tomorrow morning. Brussels insiders said the summit was an important opportunity for Varadkar to build relationships with other leaders. He will also meet the European Council president, Donald Tusk.

Officials said the Taoiseach expected to discuss Brexit-related issues with a number of European leaders on the fringes of the summit today and tomorrow. He has already spoken with several of them by telephone.

They added that Mr Varadkar will stress the need for Brexit talks to progress quickly so that their second phase – on the future relationship between the EU and the UK, which will have a huge bearing on the future of the Border – can begin later this year.

At the leaders’ dinner this evening the British prime minister, Theresa May, is expected to give her fellow heads of government a summary of UK expectations for the talks, which got under way earlier this week.

Kieran McQuinn of the ESRI said the main impact of Brexit would be through the job market, in the form of lower employment growth and marginally higher unemployment. He also suggested that the institute’s estimate of the financial loss to the Republic of Ireland could be on the conservative side, as it failed to take account of Brexit’s impact on international supply chains and consumer spending.

A hard Brexit, which would see the UK leave both the single market and the customs union, is expected to result in higher prices here, as UK multinationals pass on the cost of a weaker pound to consumers. “So you could argue the estimate we’re coming up with here is potentially lower bound in terms of what the true implication would be,” Prof McQuinn said.

In its economic commentary the ESRI warned that the substantial risk posed to the economy by Brexit had coincided with a marked softening of tax revenue this year, which had implications for the upcoming budget in terms of limiting the scope for spending and for tax cuts.

The warning comes amid speculation that Mr Varadkar may jettison Fine Gael’s long-standing policy of abolishing the universal social charge.

Apart from VAT receipts, most other tax headings either display weak growth or substantial declines in monthly returns, it said.