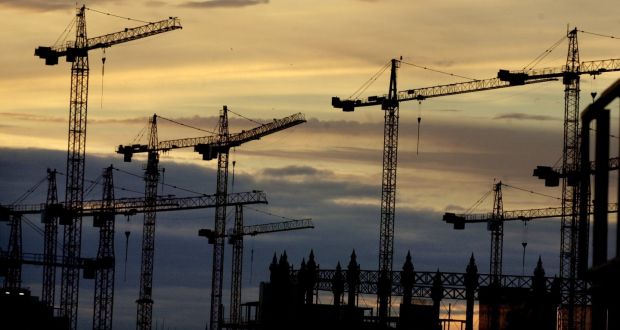 Past cranes over Dublin: There are fears in Government that the prioritisation of cities under the National Development Plan will be seen as neglect of rural Ireland.

The new National Development Plan, to be announced in the coming weeks by the Government, will commit to spending €115 billion over the next decade in a vast programme of building and public investment in transport infrastructure, health, education and community development.

The plan, which was discussed by Ministers at a special Cabinet meeting on Monday night and is being finalised in the coming weeks, will feature new and existing commitments, including the Cork-Limerick motorway, a second runway at Dublin Airport, expansion to the Dart rail system in Dublin, a schools building programme, a garda ICT system and a rural regeneration fund.

The plan will be published along with the Government’s National Planning Framework, an overarching plan for investment and development intended to promote the growth of cities such as Cork, Waterford, Limerick and Galway as a counterbalance to the rapid growth of Dublin in recent years.

There are fears in Government, however, that the prioritisation of the cities will be seen as neglect of rural Ireland, and Ministers and TDs have been lobbying Minister for Finance Paschal Donohoe and Minister for Housing and Planning Eoghan Murphy in recent weeks to include rural development as part of the framework, and the investment plan.

Speaking after the Cabinet meeting, Minister for Rural Development Michael Ring said that the Government had listened to submissions from local authorities, Ministers and backbenchers.

“I’m very, very confident that this will be a very good plan for the future of this country,” Mr Ring said. “It’s one that the people of this country will be very pleased with.”

However, he acknowledged that “it can’t be one for everyone in the audience”.

“There’s only a limited amount of funding,” he said.

Asked if the northwest would be looked after, as there has been speculation that no urban centre north of the Dublin-Galway line would be prioritised, Mr Ring said, “The whole country will be looked after”.

Fianna Fáil spokesman Barry Cowen said that the Government “has already made a dog’s dinner out of the National Planning Framework”.

“It’s all very well planning for Ireland’s needs in urban centres for 2040 but it should not be instead of or at the neglect of rural Ireland. Whether Leo realises it or not, rural Ireland is a central part of our country and they will not accept nor should they be asked to be treated like an add-on or second tier of our society,” he said.